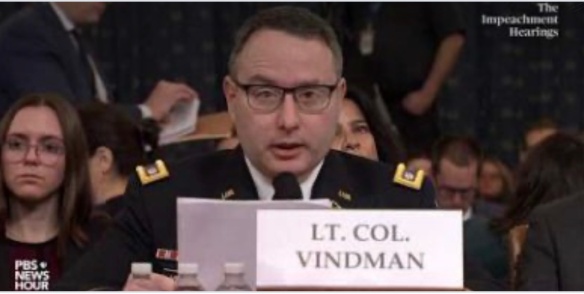 Do you support the retaliation against Lt. Colonel Vindman, a decorated soldier who legally obeyed a subpoena for his testimony and told, under oath, his version under of the events of the phone call between Trump and President Zelensky of Ukraine?

After rewatching the nine minute opening statement by Lt. Colonel Alexander Vindman, I am struck by the courage and patriotism of this man who was fired for his Congressional testimony during the House impeachment proceedings. I want to hear from Trump supporters how you feel about Trump’s obvious, vindictive retaliation against Vindman’s testimony in front of Congress, the firing this highly decorated soldier.

I highlight these statements from the video of Lt. Colonel Vindman’s opening statements :

“Next month will mark 40 years since my family arrived in the United States as refugees. When my father was 47 years old he left behind his entire life and the only home he had ever known to start over in the United States so that his three sons could have better, safer lives. His courageous decision inspired a deep sense of gratitude in my brothers and myself and instilled in us a sense of duty and service. All three of us have served or are currently serving in the military. Our collective military service is a special part of our family’s story in America.

”I also recognize that my simple act of appearing here today, just like the courage of my colleagues who have also truthfully testified before this Committee, would not be tolerated in many places around the world. In Russia, my act of expressing my concerns to the chain of command in an official and private channel would have severe personal and professional repercussions and offering public testimony involving the President would surely cost me my life. I am grateful for my father’s brave act of hope 40 years ago and for the privilege of being an American citizen and public servant, where I can live free of fear for mine and my family’s safety.

”Dad, my sitting here today, in the US Capitol talking to our elected officials is proof that you made the right decision forty years ago to leave the Soviet Union and come here to United State of America in search of a better life for our family. Do not worry, I will be fine for telling the truth. Thank you again for your consideration, and I would be happy to answer your questions:”

3 thoughts on “I Want To Hear From Trump Supporters!”